This is crazy! A Saudi prince bought plane tickets for his 80 falcons!! 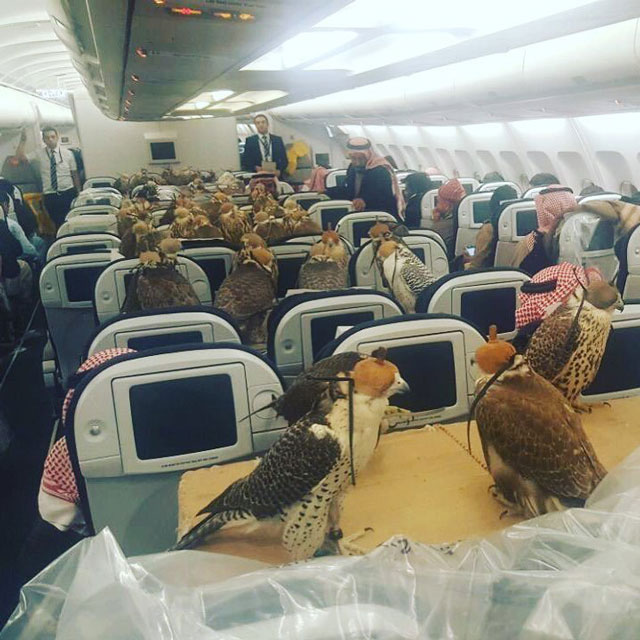 This photo was taken by the plane’s pilot and was posted on reddit by his friend.

A redditor commented that this isn’t unusual:

“…It’s not an unusual sight to see falcons on planes like this, it’s a natural occurrence in the Arab States. Falconry is steeped in history in the Arab states and the falconer’s birds are revered and treasured. An awful lot of the Falcons are bred in the UK and other places as the heat has an impact on breeding. I have bred and flown falcons from the UK to Qatar and the UAE At any check in desk in the Arab States Falcons can be found sat on a perch next to the falconer. I would assume that these Falcons are on their way to a hunting meet, as typically a member of a Royal Family would have the Falcons transported on seat backs and not on flat tables. If ever a flat piece of wood is fashioned as a perch for Falcons to sit on, then a rug is used for grip and then discarded after the flight. Believe me, a Royal Family member is not going to let a £25,000 to £50,000 falcon sit on bare wood. A member of one of the Royal Family specifically hires a complete plane and nothing but his birds and his falconers are on that plane. The falconer breeders at the departure end meticulously use defogger machines to sanitise the aircraft before the birds are put on the aircraft. The falconers that come with the aircraft are designated with birds to look after during the flight. The falcons paperwork, including their passports, CITES registration, health certificates and ring registrations are handed and checked by the falconer as they take the falcon aboard the aircraft.”