Here’s something BIZARRE… Deep-sea scientists have pulled up a FISH WITH NO FACE off the coast of Australia!

Apparently the fish, which has been named a Faceless Cusk, doesn’t need eyes because it lives in the deep dark depths of the ocean.

The Investigator, an Australian research vessel, has been trawling east of Australia’s Jervis Bay, New South Wales and found this weird-looking fish about two and a half miles down.

It’s not, however, the first time the Typhlonus nasus has been pulled up. In 1874, the HMS Challenger, discovered the weird-looking fish and drew this image of it.

One of the Investigator scientists on the trip recently blogged this:

We’ve had a few challenges surveying this abyssal plain off eastern Australia. It’s no easy task working at great depths, and at times we’ve come up against an angry seafloor with huge boulders and canyons. Deploying and retrieving our collecting gear from 4000 metres is a skillful operation that takes five to six hours and involves paying out more than seven kilometres of wire. So just imagine the effort it must have taken for the Challenger’s crew to trawl down to 6000 m depths using piano wire, without our high-tech winches and computers! 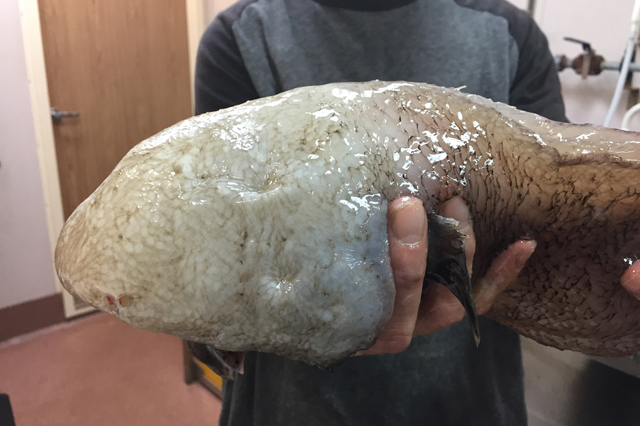 Faceless fish and other ‘weird’ creatures, many new species, hauled up by scientists from deep waters off Australia https://t.co/quSfm4qC8P — AFP news agency (@AFP) May 31, 2017